Dakshineshwar Skywalk – a monumental adjunct to the renowned Kali Temple

The City of Kolkata is one of the oldest urban conglomerates in the sub-continent; it was here that the British chose to have their colonial era capital for a long time, and traders from different parts of the world chose to base their trade activities, serving as a gateway to the fertile lands abutting the Bay of Bengal, a port of tremendous trade and strategic importance. Kolkata is the city which has to its credit quite a few infrastructure firsts, the multi-mode bridge across the mighty Ganges-‘Howrah Bridge’, the country’s first sub-terrain MRTS, Kolkata Metro amongst others.It is also the city which has devotion and religion perpetually coursing through its veins, home to some of the most revered places of worship of Hinduism, the seat of divine female power, Shakti, the “Dakshineswar Kali temple”. Located on the banks of Ganges at the northern tip of the metropolis, this place of worship was originally built by Rani Rashmoni. 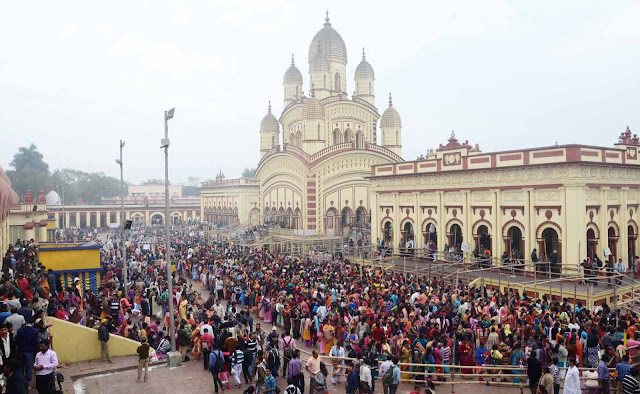 Today, Dakshineswar continues to draw huge numbers of devotees all around the year and is one of the most visited places of worship in Kolkata.In the earlier days, visiting by boat was one of the most preferred ways to reach the temple, and by road being the second. The railways pitched in later and constructed a station dedicated to the trains passing allowing devotees to disembark and pay their homage.Urbanization, growth of the local economy and ever-increasing throngs of devotees has brought about prosperity, increased business for local shopkeepers, but along with it its inherent share of problems. The approach road to the temple, that was once predominantly pedestrian, now has to cater to a growing vehicular traffic of private cars, taxis, two wheelers and goods vehicles. Increased footfalls over the years has brought in a lot of shops and kiosks catering to the visitors, offering Prasad, Pooja material, embellishments for the deity and assorted food, sweets, snacks and tea stalls. Finding no other space to occupy, they built over the footpath, pushing pedestrians to the road, jostling for space with rickshaws, cars and goods vehicles. Further, the approach road is extremely slow moving and congested during regular days and a logistics nightmare on festive days.

The West Bengal government’s demand was direct: They wanted a solution for segregation of traffic and pedestrian movement while ensuring the livelihood of shopkeepers, ease of movement for commuters and the safety of the devotees.

Rising up to the challenge of decongesting and structuring devotee-traffic to Kolkata’s Dakshineshwar Kali Temple,DFIfollow the tried and tested ‘Form-follows-Function’ principle to bridge the tradition vs. technology divide…